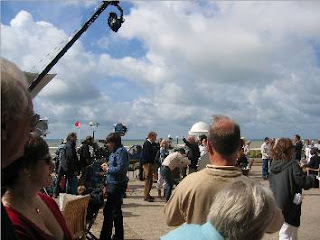 Had some fun yesterday. I had been 'invited' down to the south coast, Bexhill on Sea, where they were filming an edition of the Antiques Roadshow on Modern Collectables. I'd been asked to bring a small sample of books as they weren't sure if it would be of any interest to the book expert Clive.

A fresh, blustery, showery day outside the De La Warr Pavillion on the sea front. Much milling and to-ing and fro-ing. People with walkie-talkies, security people, marshals and pavillion staff and, from 9.00 a steadily growing queue of people clutching bulging bags of items for perusal.

Because we'd been invited we didn't have to queue, but hung around in a separate area feeling like minor celebrities. Very minor. I had no guarantee that my books would be of enough interest to feature on the show. Other 'invitees' were a sure-thing, having been visited by their 'expert' in their homes. One of these 'A-list' invitees (the proud owner of some rather oddly shaped radiators) sounded very unimpressed by my proposed contribution to the show. "Ladybird Books? We have hundereds of those at home".

Clive appeared and we found a corner to show my wares. He looked busy and business-like and rather unimpressed. This was clearly not his area of expertise so I hurriedly told him why I thought certain items might be of interest. His face stayed blank - stoney even. "Too much detail" he muttered and stalked away.

A few moments later one of the BBC staff returned. "As I thought" she said, "Clive thinks they're of interest so we'll be filming you as soon as we get a slot". Well Clive sure has a funny way of showing it! I had been sure she was about to break rejection to me gently.

Almost immediately we were take to a table, dabbed down by a jolly make-up lady (my son refused to have anything put on him) and we were seated with Clive as he talked me through my items. The second the cameras were rolling he came over all jolly and twinkly and avuncular - but I suppose if you have to keep that pace up for 12 hours, you have to ration your goodwill and good humour rather. 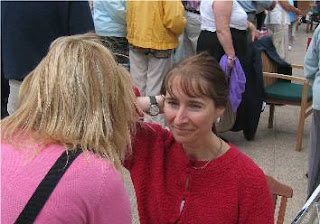 Half-way through filming the sky grew suddenly grey and rain stated to fall. I was torn between the desire to keep things going and the urge of the collector to throw herself bodily across the books to protect them from the drops. By the end of the interview there were 4 people holding light-boards and umbrellas over us. It turns out these people weren't motivated by the desire to protect my First Editions but to finish the scene. Having filmed the piece they then had to focus on the hand-movements and shoot those separately. Trying to keep the continuity was like trying to re-place the ball after a foul shot in snooker. During the interview I had foolishly gone to move a book and Clive (in rather un-avuncular fashion) actually slapped my hand away! The director and cameraman were lynx-eyed on the position of the books, re-tracing our hand movements from one to another to enable close-ups. 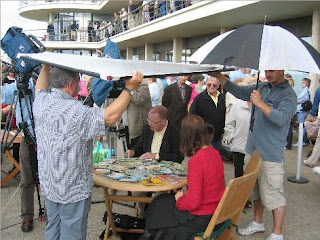 And that was it. I was bundled away to make room for a collection of posh ceramic jewellery. The new series of AR (as we conoscenti call it) starts in September, at which time I'll find out when the "Tomorrows Antiques" episode will be shown.

Always assuming, of course, that we don't get edited out...
Posted by Helen at 07:11

Will you let me know when it's on? I'll give you a tip-off about my wildlife group's programme, too, lol.

Very interesting site. Look forward to seeing the item on ARS, I hope I have'nt missed it. I'm interested as I have just discovered a copy of In The Train with Uncle Mac and I remember him from Childrens Hour on the wireless. Must have bought it for my children in the 60's. I'm 71 now and remember these things.

You haven't missed it. I think it will be screened in December. I still haven't heard whether we'll be featured yet - I'll post a message here when I hear.

I don't remember Uncle Mac or Auntie Muriel from my own childhood - but just the names conjure up and image of a very different world of books and broadcasting.

Just come across your piece about the daunting experience you had on the Roadshow. Good for you and I hope they don't edit it out or cut it too much i.e. no digital trickery! I look forward to seeing it, so please let us all know when it's to be shown. Your website gets better and better, thanks.

Some snippets from old postings